Selling climaxes are considered a sign of accumulation as ‘strong hands’ buy the stocks offered for sale by ‘weak hands.’

The S&P 500 Index itself also saw a selling climax. The chart below highlights all weekly reversals (not all of them led to 52-week lows) since mid-2013. All but one (August 24, 2015) were followed by at least another week of gains. 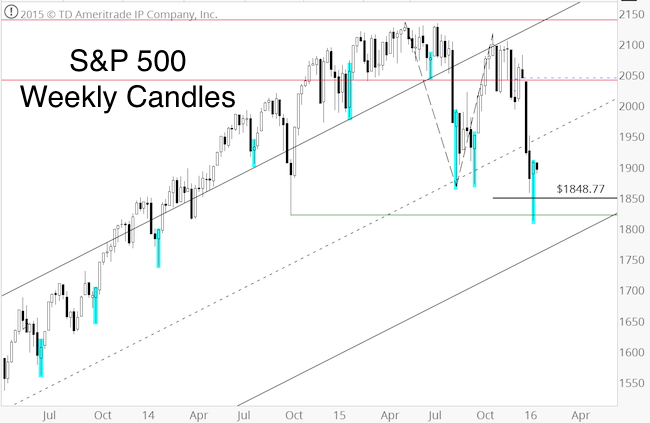 The January 18 Profit Radar Report proposed that a break below S&P 1,870 would lead to a swift drop to 1,820, but listed five reasons why stocks should bounce thereafter.

With the minimum down side target(s) met, the odds of a bounce or more lasting low have increased.

It remains to be seen whether this bounce will stick or eventually (perhaps after weeks of chopping around) roll over.

A break below 1,812 would unlock the next down side targets. Such a break, if it does occur, would probably set up a better buying opportunity (assuming there will be a number of bullish divergences).

Continued updates and analysis are provided via the Profit Radar Report.