Brexit! What Brexit? The Brexit reaction doesn’t even register on the monthly S&P 500 chart. ‘A tempest in the teapot’ as the British would say. This is yet another example why we do not focus (and sometimes ignore) news events. 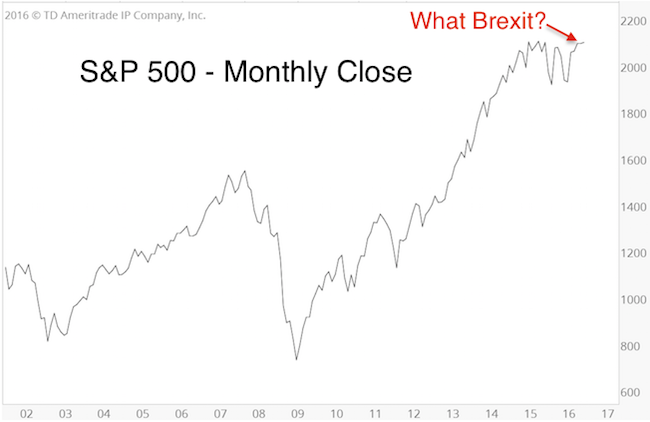 The Brexit vote did cause undeniable ripple effects, but only temporarily. It’s time to tune out the noise and stop using Brexit as excuse or cause for everything that happens.

As the headlines below show, Brexit can’t be savior and scapegoat at the same time:

The structure of the post-Brexit selloff confirmed that the decline would turn out to be temporary. In a section titled “Chart Gaps and Major Market Tops” the June 26 Profit Radar Report noted open chart gaps and stated the following:

One of the reasons we continuously anticipated new all-time highs in recent years were open chart gaps left near the top. This is again the case now. There are open gaps at 2,104.57 and 2,117.96” 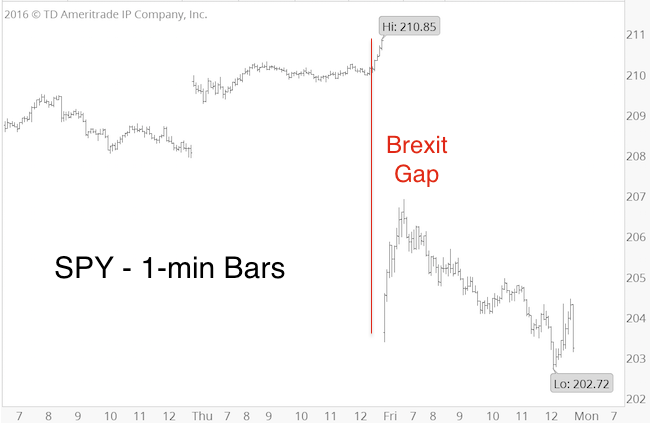 Initially, we anticipated this bounce to be choppy and relapse into the ideal 1,970 – 1,925 zone, but as the June 29 Profit Radar Report brought out, “this bounce has been stronger (in terms of breadth) than it was ‘supposed’ to be. Preliminary data suggests that the S&P may be experiencing a breadth thrust similar to what we saw in mid-February (see February 21 PRR). Based on the strong kick off from Monday’s low, we must consider the possibility that a more lasting low is already in.”

The February kickoff analysis, originally published in the February 21 Profit Radar Report, is available here: 2016 Bear Market Risk is Zero Based on this Rare but Consistent Pattern

Last week’s kickoff rally suggested a short-term digestive lull (with initial support near 2,070) followed by higher prices eventually. However, we never put all our eggs in our basket. No matter how compelling last week’s breadth thrust is, we are waiting for price to meet our parameters (buy triggers) before going long.

Until this happens, we may see more choppiness, and even more down side (although unlikely). Continued updates are available via the Profit Radar Report.