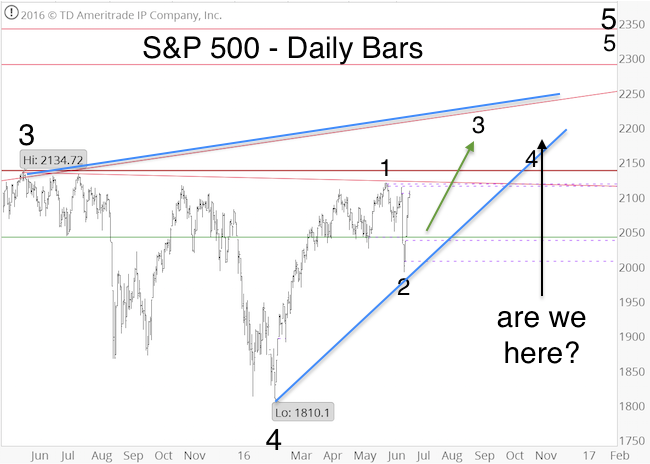 Despite a prolonged trading range, the S&P followed this projection very closely. It rallied as high as 2,193.81 and subsequently slid as low as 2,157.09 (see ‘are we here’ arrow).

Does that mean that the next leg higher us about to launch?

It could be. The question is whether stocks will correct further before the next rally or not.

Under normal condition, stocks should pull back further. However, we’ve seen one of the longest and tightest trading ranges in history (July 14 until today).

This trading range was enough to digest over bought readings caused by the post-Brexit spike. We may have just seen a correction in time rather than price.

However, in terms of seasonality, September is the worst month of the year. Buying in September is less than ideal.

October, on the other hand, has often served as launching pad, most recently in 2014 and 2015.

Further weakness with targets around 2,150 – 2,130 and 2,130 – 2,070 reached later in September or in October would certainly set up a much better buying opportunity than chasing price around 2,200 in September.

We consider any pullback into the above ranges a gift. Life is always more pleasant if you receive a present. If we’ll get it, we’ll certainly accept it (buy stocks), but we can’t bank on it. 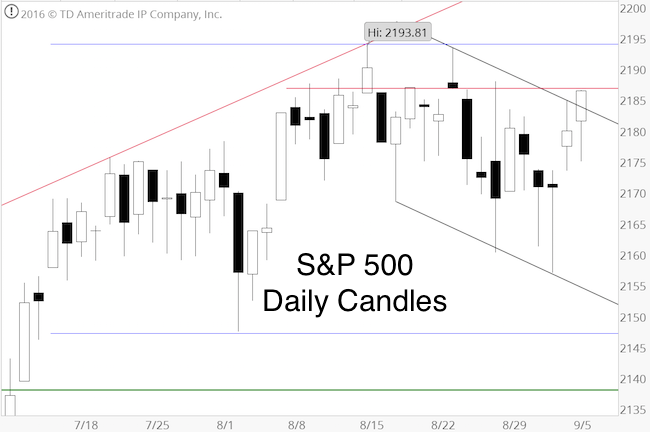 If the market moves higher soon without noteworthy pullback, we’ll have to deal with it, and determine whether it’s a temporary or a sustainable move higher.

Short-term, the S&P has broken outside of the descending black trend channel and butting against minor resistance (see chart above). Based on the put/call ratio and short-term RSI, the S&P is nearing overbought, but as long as trade remains above the black trend channel, the S&P may venture higher.