This means, we’ve been buying dips, but refusing to chase trade to the up side.

However, the September 20 Profit Radar Report warned that: “In February and June stocks produced a breadth thrust from their low. Thus far however, the S&P 500 hasn’t shown any convincing follow through to the up side. The odds of soaring without a prior test or break of the lows have diminished. We are taking some chips off the table.”

Over the next few days, we sold IWM and XIV for gains of 2.33% – 14.46%. We continued to hold SPY in case stocks move higher, but closed that position at breakeven on October 4.

The chart below, initially published in the September 11 Profit Radar Report, shows the potential down side targets based on Fibonacci retracement levels. 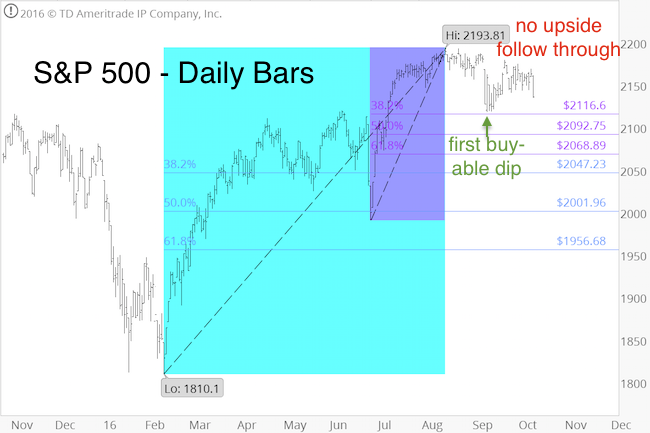 Ultimately, the scope of this correction depends on whether stocks will retrace the gains since the February low (S&P: 1810) or June low (S&P: 1,992).

We believe the retracement will be more on the shallow side, that’s why we bought the first buyable dip in September.

The October 2 Profit Radar Report highlighted a concerning Nasdaq constellation: “The Nasdaq-100 and QQQ ETF are near trend channel resistance, and perhaps more importantly, near Fibonacci resistance and the 2000 all-time high (RSI and Nasdaq stocks above their 50-day SMA did not confirm this high). We expect new all-time highs later this year, but if QQQ is going to take a breather, it could be around 120+/-.” 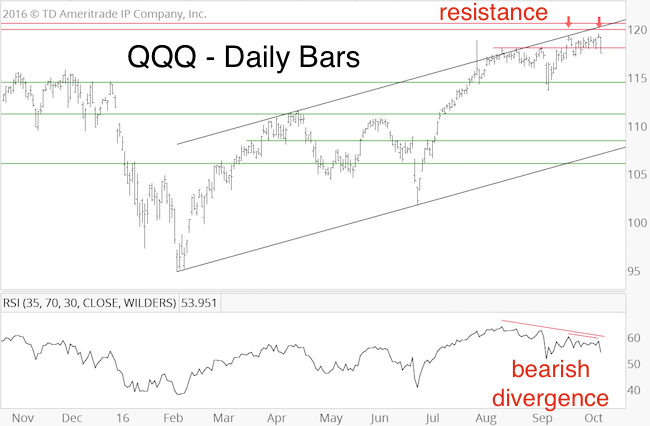 Although the S&P 500 was stuck in a triangle with lower highs and higher lows, internal strength was wilting (the McClellan Oscillator and Summation Index made lower lows – see bottom graphs). The chart below was published in the October 9 Profit Radar Report.

It seems like stocks want to correct further before moving higher. This correction could stop in the 2,120 – 2,100 zone, but it could also go quite a bit lower.

We will be looking to buy the dip, because a number of indicators suggest a strong rally following this correction.

When we buy, depends on the structure of the decline, bearish sentiment extremes, and whether we see bullish divergences. The Profit Radar Report already identified a beaten down low-risk value ETF and an aggressive high octane ETN with a built in safety cushion to take advantage of the year-end rally.