Were you able to get one of the special edition “Madam President” Newsweek issues?

“Like everybody else, we got it wrong,” said the CEO in charge of this mishap.

Indeed, the media did get it wrong. According to the media:

1) Donald Trump was ‘supposed to’ be only second best

This is the second time in 2016 that media and market pundits got blind sighted and fooled by a big event.

In June it was the Brexit vote, which 1) went different than expected 2) the stock market rallied instead of crashing like it was ‘supposed to.’

2) How the market will react to a certain outcome

As the above two examples show, the market rarely follows the expected path.

The indicator-based approach has proven to be much more accurate than relying on news. The last free S&P 500 Forecast pointed out a number of sentiment extremes and stated that:

“The best opportunities are born in times of panic. The more panic, the better the opportunity. It’s risky to short such a market, and much more promising to look for a low-risk buying opportunity.”

Stock futures suffered a brief panic selloff on Tuesday night (S&P 500 futures were down as much as 120 points), but quickly recovered.

This was in line with this observation shared in the November 6 Profit Radar Report:

“The VIX is stretched to the up side, with various bullish sentiment extremes and bearish seasonality. Excessive fear shown going into an event causing uncertainty (election) usually results in a quick retreat of fear once results are in and digested.”

The VIX has lost over 50% in the past few days.

It’s hard to believe that the S&P 500 cash index (unlike the S&P 500 futures) remainded above support identified last week and reacted immediately to the oversold condition and bullish divergences. 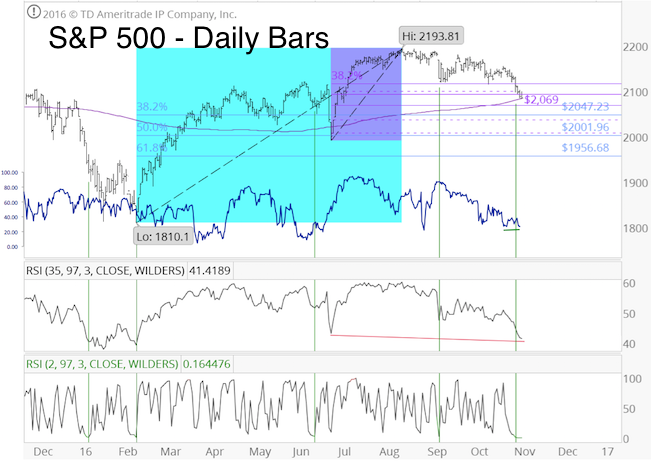 With election uncertainty out of the way, we can refocus on the basics:

Short-term, the S&P 500 is butting against triple resistance while overbought. In addition, the days following the election tend to show some weakness. 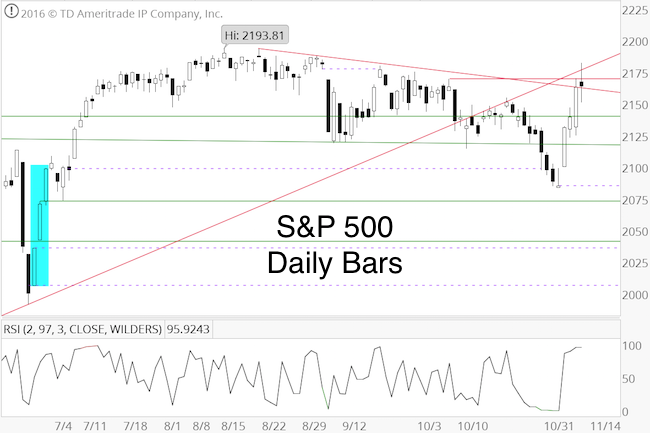 Longer-term, there are a number of bullish forces which should push stocks through resistance.

The Profit Radar Reports up side target may be surprising to many, but it is strictly indicator based. At this point, only one ingredient is missing to unlock higher price targets.

Up side targets, the missing ingredient, and continuous indicator-based S&P 500 analysis are available via the Profit Radar Report.