There hasn’t been a truly noteworthy investor sentiment extreme since the January/February lows, when the Profit Radar Report recommended buying.

Barron’s rates the iSPYETF as a “trader with a good track record.” Click here for Barron’s assessment of the Profit Radar Report.

Sunday’s (May 8) Profit Radar Report published the chart below and pointed out the following:

“Some measures of sentiment are in unusually bearish territory. Unusual considering that the S&P just traded only 1% away from its all-time high! Shown below are the % of bullish investors (polled by AAII) and the CBOE equity put/call ratio.

The put/call ratio doesn’t have a perfect track record, but as the dashed red lines show, high readings mark some sort of low more often than not.” 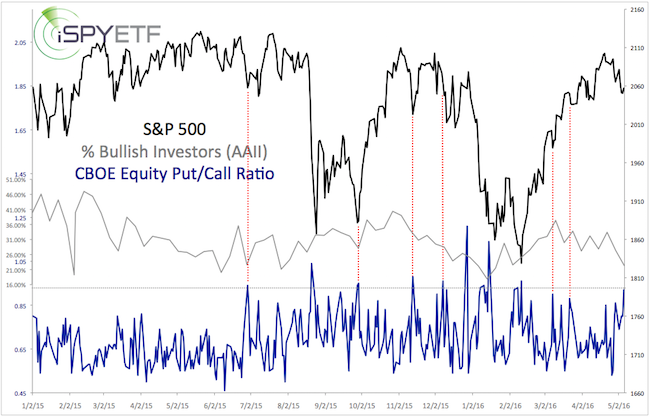 This constellation led to the summary offered by the same Profit Radar Report:

“As long as the bullish RSI divergence and support near 2,040 hold, odds favor either a bounce or rally to new recovery highs. We will be watching the open S&P chart gap at 2,079.12. Once/if the gap is closed, we’ll have to determine if this bounce has legs (new recovery highs) or if it is just a small bounce within a deeper correction.”

Continued S&P 500 analysis is available via the Profit Radar Report.

We’ve looked at the VIX/VXV ratio several times in the past. This has been a very helpful and generally accurate indicator.

Here’s how it works:

The VIX/VXV ratio popped to 1.03 yesterday. This is the highest reading since October 17.

The green lines show that readings above 1 marked a low 3 out of 4 times.

Right now, this bullish VIX/VXV ratio reading does not jibe with my overall outlook, but it has to be respected to some degree.

Here’s my short-term S&P 500 forecast, which considers the ramification of the VIX/VXV ratio in combination with other indicators.

Aside from the autumn colors, everything is green on Wall Street. Stocks are up almost everywhere you look. There is only one broad market index that could reasonably be interpreted as being bearish.

The Dow Jones, S&P 500 and Nasdaq are at new (all-time) highs, and it takes a permabear or nit-picky glass half empty kind of a person to find anything alarming in those charts.

Unlike the Dow Jones and S&P 500, the NYA also includes small cap stocks, which explains why the NYA is lagging.

In fact, the NYA chart gives hope to all those who missed the latest rally. Why?

The NYA is bumping up against a serious resistance cluster made up of:

In addition, (bearish) Elliott Wave aficionados may be quick to point out that the NYA’s decline from the September high to the October low could be counted as five waves.  Such a 5-wave move would suggest at least one more leg lower.

The overall strength of the “October blast” rally suggests that NYA will eventually surpass this resistance cluster. But if NYA is going to pull back and fill some of the open chart gaps, right about now (or at 10,850 – 10,900) seems like an appropriate time to do so.

The Dow Jones is also about to run into the same resistance level that caused the September correction.

Solid resistance levels, like the ones shown above, increase the risk of a pullback, but obviously don’t guarantee said pullback. Higher targets are unlocked if the NYA and Dow Jones sustain trade above resistance.

A detailed forecast for the remainder of the year – based on an analysis of seasonality, sentiment, technical indicators and historical patterns – is available in the November 2 Profit Radar Report.

Selling climaxes are considered a sign of accumulation as ‘strong hands’ happily buy the stocks offered for sale by ‘weak hands.’

A selling climax happens when a stock/index or ETF drops to a 12-month low, but bounces back and closes the week with a gain.

There were 605 selling climaxes last week; the Russell 2000 was one of them (more details here: Will Bullish Russell 2000 Signals Last?).

As the chart above shows, the last time there were more than 500 selling climaxes was the week ending October 7, 2011, when over 1,350 stocks saw a bullish reversal from a 52-week low.

Many happy bulls and frustrated bears will likely remember that the S&P 500 hit a major bottom on October 4, 2011.

I remember the October 4, 2011 low at 1,074 like it was yesterday, probably because it was one of my best calls. My October 2, 2011 note to subscribers said the following:

“The ideal market bottom would see the S&P 500 dip below 1,088 intraday followed by a strong recovery and a close above 1,088, but technically any new low below 1,102 could mark the end of this bear market leg.”

The problem with weekly climax data is the time delay. By the time Investors Intelligence reported last week’s climaxes, the S&P 500 was already 70 points above its low.

A closer look at the Russell 2000 chart shows that, although the spike in buying climaxes is net bullish, stocks are not out of the woods yet.

The Russell 2000 has weighted down the broad stock market since March. Now, for the first time in a while, the Russell 2000 is actually outperforming large cap stocks. Does that mean that small caps will lead the market higher?

The Russell 2000 is showing signs of life, after months of underperformance relative to the S&P 500.

The Russell 2000 is one of the only indexes (along with the MidCap 400) that painted a green reversal candle (see chart insert).

Prior to erasing last week’s losses, the Russell 2000 also dipped to a 52-week low. A weekly reversal after a 52-week low is also considered a selling climax.

From a technical perspective, here are a few Russell 2000 developments to keep in mind:

Unless the ratio can move above 1.05, small caps are likely to continue underperforming their large cap cousins.

In short, the Russell 2000 is showing strength, and odds of continued up side are increasing.

The effect of lumber prices on real estate is undeniable. As such, lumber prices can be used as a forward-looking indicator for the housing sector. Right now, lumber is carving out a potential inverse head-and shoulders bounce that may burn real estate bears.

What do lumber prices have to do with real estate?

A whole lot more than most investors think.

In fact, the correlation between lumber and real estate is one of the least known, but most accurate forward-looking real estate indicators.

I know this sounds a bit obscure, but you can’t argue with the charts. The long-term correlation chart between lumber and the PHLX Housing Sector Index is available here. Is the Housing and Real Estate Recovery here to Stay?

The key point to keep in mind is that lumber prices lead real estate prices by about 14 months.

With that in mind, let’s look at the lumber chart.

Such a rally (assuming it materializes) should be felt in the housing market about 14 months later.

Of course a relapse below 340 would hint at a failed HS breakout and further weakness, which should translate into softer home prices … 14 months later.

Some of you may still wonder if lumber prices are really a ‘legit’ indicator.

Almost exactly a year ago (August 27), we published a lumber chart with a 14-month outlook via this article: How to Turn the Lagging S&P/Case-Shiller Home Index into a Leading Indicator

With the benefit of hindsight, we can now check if lumbers message a year ago proved correct.

Below is the original August 27 chart. The green graph represents lumber prices set forward by 14 months. The blue graph reflects the actual performance of the PHLX Housing Sector.

Major ‘pops and drops’ in lumber prices (such as in 2013) tend to show up muted in the real estate market – which is what happened again over the past 14 months – but directionally real estate continues to follow the beat of lumber.

Last week the CBOE Equity Put/Call ratio slipped as low as 0.43, the lowest level since January 2011. Similar readings in April 2010 and April 2012 led to nasty sell offs? But something is different this time.

The chart below, featured in the June 11 Profit Radar Report, plots the S&P 500 (SNP: ^GSPC) against the 5-and 10-day SMA of CBOE Equity Put/Call ratio.

Is the Put/Call Ratio Warning of a Crash?

Looking at the put/call ratio in isolation one could conclude that there’s a high chance of a 1%+ correction. Why?

But let’s expand our analysis to include the CBOE SKEW Index. The SKEW Index basically estimates the probability of a large decline (2 standard deviations or ‘Black Swan’ event).

The relative SKEW anemia softens the generally bearish message of the put/call ratio, but it doesn’t eliminate all the risk.

A complimentary look at the updated 2014 S&P 500 Forecast is available here: