Sometimes, investing can be so simple … if we don’t complicate things.

Here is the most basic of ‘indicators’. It has a 100% accuracy rate since the start of the 2009 bull market. In fact, it’s so basic, calling it an indicator is probably overkill.

Over three years later, the accuracy rate is still 100%.

The S&P closed the open chart gap on March 17.

According to an April 5 Bloomberg article, investors were short $1 trillion worth of stocks (the highest short interest since 2008).

QQQ has now come within striking distance of the lower gap. There are some bearish breadth divergences already, but once the gaps are closed, the magnetic force pulling stocks higher diminishes, and the odds for a pullback increase.

A temporary pullback after (even before) closing the first gap followed by another bull leg to close the second gap is possible.

Continuous S&P 500 analysis/forecasts are available via the Profit Radar Report, which was just profiled by Barron’s.

Since September 2014, the Nasdaq Composite suffered seven false. This is the most ever.

A false breakout, or fake out breakout, is a break above prior highs followed by drop back below (red ovals).

Obviously, if you are an investor who buys the breakout, the Nasdaq’s recent habit is quite annoying.

The PowerShares QQQ ETF (Nasdaq: QQQ) is based on the Nasdaq-100 (100 of the largest domestic and international nonfinancial companies listed on the Nasdaq).

The July 19 Profit Radar Report warned against a false breakout, when it cautioned that: “Despite Friday’s strong QQQ performance, the majority of QQQ component stocks closed the day in the red. QQQ sports two big up side gaps, is overbought based on 2-day RSI, and is near a cluster of trend line resistance levels.”

Subsequently, the QQQ ETF dropped below support, and is now trying to get back above prior support (now resistance).

Historically, clusters of fake out breakouts are not necessarily bearish.

A bigger and better reason for caution is lagging breadth.

Odds are that both gaps will get filled, the question is in which order. More chopping action may be ahead.

It’s been a remarkable couple of weeks for the Nasdaq, not just in terms of performance, also in terms of ‘market oddities.’

However, Google’s massive rally covered up internal Nasdaq weakness. On that day more Nasdaq-100 components were actually down than up.

New highs on negative breadth is a rare feat. Nevertheless, the Nasdaq managed to do the same thing again on Monday.

Here’s another breadth measure, illustrated visually via the chart below. The upper bars represent the PowerShares QQQ ETF, the lower graph the number of Nasdaq Composite stocks at new 52-week highs.

My most recent Profit Radar Report highlighted lagging breadth and bearish divergences and warned of a pullback.

Regarding AAPL earnings, the Profit Radar Report said Sunday that: “AAPL is butting against minor resistance and AAPL seasonality shows some weakness in the middle of July. AAPL’s move is likely to be more subdued than GOOG.”

AAPL (Nasdaq: AAPL) dropped as much as 7% in post-earnings after market trading and gapped below support this morning. Click here for detailed AAPL analysis.

What’s next for the Nasdaq?

The bottom line, based on a number of indicators, is this: The potential for a nasty Nasdaq selloff exists, but another rally leg to new highs seems more likely. The green lines (around 111 and 106) should provide support for the QQQ. If they don’t, watch out.

A more detailed analysis for the S&P 500 is available here: S&P 500 Analysis

For most of the 21st century Apple has been cool, while Microsoft couldn’t do more than drool. But things are changing (at least for investors). Microsoft has gone from ‘drool to cool’ on Wall Street. Will this surprising trend last?

Apple is hip and cool. Microsoft is boring and outdated. Apple (Nasdaq: AAPL) is in, Microsoft (Nasdaq: MSFT) is out.

That’s been the case most of the 21st century, but there’s been an odd shift lately.

Investors are picking MSFT over AAPL.

If Microsoft’s Cortana had a voice in this article, she’d point out that investors are dumping Siri to be with Cortana.

The charts below show that Cortana may be right.

The MSFT:AAPL ratio chart shows the ratio bounce off a 1-year support level. If the ratio can overcome near-term resistance it is likely to climb further.

This would suggest MSFT will continue to outperform AAPL, at least for a little while.

A look at history, in particular recent history shows that September is a particularly painful month for AAPL investors. Click here to view a detailed look at AAPL seasonality.

A bigger and better iPhone, the new iWatch and new AAPL all-time highs … Apple has a lot of good things going. But, ironically this exciting time of the year (in terms of product launches) is the most treacherous for Apple shareholders.

Product rumors are planted in the spring and ripen in the fall as rumors mature towards tangible reality. Apple fans are hoping to feel, touch and buy a big screen iPhone or even an iWatch.

The August 24 Profit Radar Report summed up Apple’s position like this: “AAPL rallied to new all-time highs. As the chart shows, AAPL is just above green trend line support and just below red trend line resistance. AAPL seasonality points higher for another few weeks before the biggest seasonal weak spot of the year (AAPL topped on Sep. 22, 2012 at 705, split-adjusted). In short, the path of least resistance is up, as long as AAPL doesn’t close below 100. Danger will rise in mid-September.”

The chart below shows the various trend lines and support/resistance levels mentioned.

AAPL sliced below 100 on Thursday. Support around 100 has now become resistance. Green trend line support is at 97.

Based on seasonality, risk is rising and the path of least resistance is down as long as trade remains below 100 – 101.

Apple’s ‘bad Thursday’ spilled over to the Nasdaq-100 as the PowerShares QQQ ETF (Nasdaq: QQQ) painted a big red candle.

Thus far, QQQ remains above support at 99. A close below 99 may elicit more selling.

This week is jam-packed with news. Apple, Bernanke, and Germany’s Constitutional Court are slated to make potentially market-moving announcements. Here’s one simple technical tip that will help navigate a confusing situation.

What does Apple’s Tim Cook, the Fed chairman Ben Bernanke, and Germany’s Constitutional Court have in common? They are all expected to announce much anticipated news this week.

Apple is putting the finishing touches on the Yerba Buena Center for the Arts in San Francisco. That’s where a select few will (or are expected to) lay eyes on the new iPhone 5.

This drop triggered a bullish percentR low-risk entry against the 20-day SMA. Just because this is called a “bullish” low-risk entry doesn’t mean it’s time to buy.

Apple shares tend to move higher when new products are revealed and correct thereafter (with the exception of the April 2012 iPad 2 unveiling, which coincided with a larger drop, instead of a rally).

A rally parallel to Apple’s event would likely provide a good set up to sell AAPL shares. A drop below the percentR trigger level will also suffice if we don’t see the customary Apple release spike.

Short selling a stock is not for everyone. But Apple accounts for 20% of the Nasdaq-100 index (corresponding ETF: PowerShares QQQ) and shorting the Nasdaq-100 via short ETFs like the Short QQQ ProShares (PSQ) is a more accessible way to benefit from falling Apple prices.

The ESM has many flaws (one of them is lack of funding) and one of them may prevent its VIP from playing “money ball.” The German Constitutional Court will rule over the legality of participating in the ESM on Wednesday.

The S&P 500 Index (SPY) is points away from a 55-month high and I don’t think that launching QE3 right now makes sense, but I don’t know what’s going on behind closed FOMC doors and the general consensus is that the Federal Reserve will announce QE3 on Thursday.

What does the S&P 500 chart tell us about stocks? If the chart could talk it’d say that now is “rubber meet the road” time.

The S&P is close to key resistance at 1,440 (this month’s r1 is at 1,437) which the Profit Radar Report has been harping about. 1,440 is the most important resistance in the neighborhood. It separates bullish bets from bearish ones and provides directionally neutral low-risk trade opportunities (my bias is to the down side, which may require waiting for a spike above 1,440 followed by a move below).

Various news events suggest that this week is important. Technicals agree. Use important support/resistance levels to put the odds in your favor. 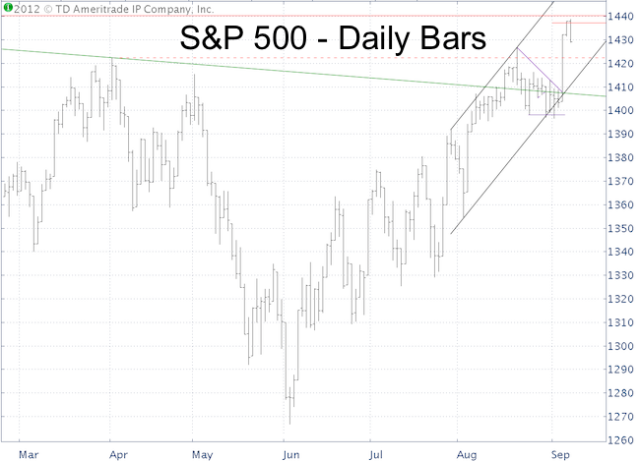