A recent Federal Reserve study warns that leveraged ETFs may contribute to a 1987-like ‘Flash Crash.’ Talk about the ‘pot calling the kettle black.’ There are some serious flaws in that assumption and if anything will sink stocks, it’s the Fed itself.

Now this is an attention grabber. A 43-page study by Federal Reserve economist Tugkan Tuzun warns that (inverse) leveraged ETFs (called LETFs in the study) could contribute to a 1987-like ‘Flash Crash.’

With all due respect, in my humble option there are some holes in this 43-page study.

Here’s the crux of the study. This is directly from the Fed report, so bear with me:

“Generating multiples of daily index returns gives rise to two important characteristics of LETFs that are similar to the portfolio insurance strategies that are thought to have contributed to the stock market crash of October 19, 1987 (Brady Report, 1988).

To be honest, I did not have time to read the whole study, but would like to point out the following:

1) As per page 4 of the Fed report, some of the reasoning is based on ‘anectodal evidence.’ That’s no joke. It reads: “Anectodal evidence suggests that LETFs commonly use swaps and futures contracts to rebalance their portfolios. Swap counterparties of LETFs are likely to hedge their positions in equity spots or futures markets.” If LETFs use index futures … how credible is a study based on anectodal evidence?

2) According to the study, the total assets of the LETF market amounts to $20 billion. This sounds like a big number, but it’s a drop in the bucket. Apple alone has a market cap of $420 billion.

3) The report omits the hedging feature of LETFs. Leveraged ETFs have been used to hedge a portfolio (i.e. a 3x short ETF can be used to hedge long positions). As such, they act like puts and allow investors the freedom to hold on to their hedged long positions, even in a falling market.

In 2009, Jim Cramer went on a crusade against short ETFs (or inverse ETFs) for the same reason. He claimed that leveraged short ETFs drive down the prices of financial stocks.

I don’t know how that can be since (anectodal) evidence suggests short ETFs don’t short the underlying stocks. Even if, in March 2009, short financial ETFs accounted for a total of only $1.17 billion while leveraged long ETFs made up $2.65 billion. If anything, leveraged ETFs should have buoyed financial stocks.

The biggest risk to the stock market is the Federal Reserve’s QE policy, not leveraged ETFs.

Are leveraged ETFs and leveraged short ETFs risky? You bet they are and investors should absolutely be aware of those risks.

The article “Must Know Basics About (Short) Leveraged ETFs” highlights the risks every investor needs to know before buying short or leveraged ETFs.

Historically short sellers of stocks have an 82% chance of making money this week. However, the S&P 500 Index failed to registered a bearish price/RSI divergence at its September 14 recover high.

All recent highs that were followed by a decline of around 10% or more were foreshadowed by a bearish RSI divergence (I use a unique RSI setting to spot divergences – see chart below). So even a bearish outcome this week would likely be followed by higher prices later on. 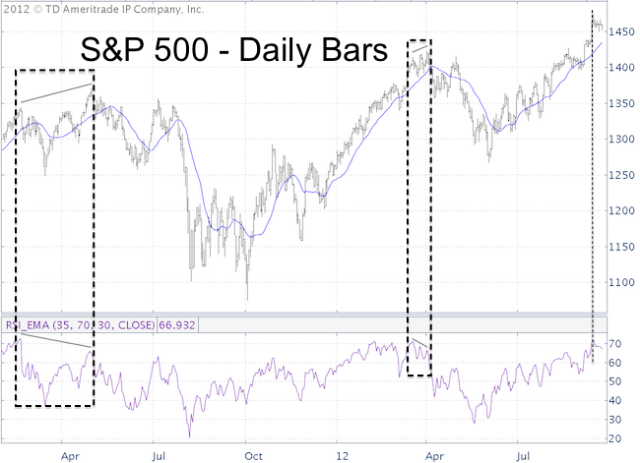 The purpose of the Profit Radar Report is to identify high probability trading opportunities. With the conflict between bullish technicals and bearish seasonality, there obviously is no high probability set up right now.

One of two things will have to happen to create a better set up:

2)   Prices spike quickly to a new high accompanied by a bearish price/RSI divergence to set up a possible shorting opportunity.

An early tip off to the next developing set up may be a developing triangle. A break out above or below triangle support/resistance should give us a measured target, which may quite possibly set up an even better opportunity than the actual triangle.

Continuous updates and trading opportunities are provided via the Profit Radar Report.