The chart below plots the Nasdaq-100 (represented by the QQQ ETF – right graph) against the S&P 500 and NYSE Composite. 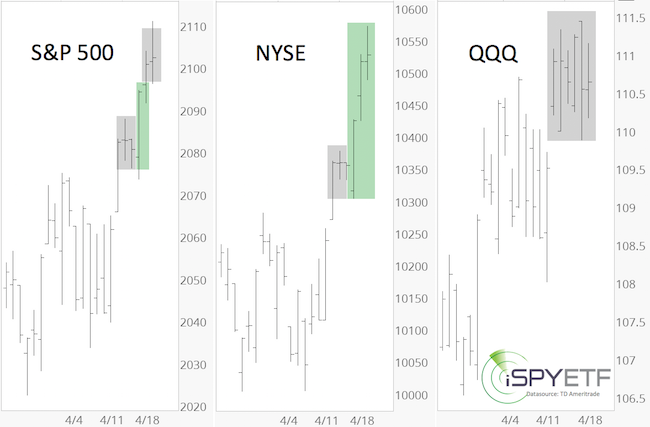 QQQ has been stuck in neutral, while the S&P 500 and NYSE move ahead in second and third gear.

What does this mean for the stock market in general?

We’ve probably been conditioned to believe that large tech underperformance is bad for the broad market. And over the short-term (1-4 weeks), historical performance numbers support this conclusion.

Over the long-term (3-12 months) however, large tech underperformance is actually positive for the overall market. How come?

There are probably several plausible explanations, here is mine:

Since the very beginning of this rally, the Profit Radar Report pointed out the remarkable strength of the post February 11 meltup:

February 17 PRR: “The rally of last Thursday’s low at 1,810 has been very strong. Historically, this kind of ‘escape velocity’ can potentially carry stocks higher for months.”

A strong rally is like the proverbial tide that lifts all boats. Unlike other rallies in 2014 and 2015, which were more selective, this rally is actually ‘lifting all boats.’

The NYSE Composite Index consists of some 1,900 stocks (large, mid, small-cap stocks). The Nasdaq-100 of only 100 large cap tech stocks.

The fact that the NYSE Composite started to outperform the QQQs shows that liquidity is penetrating all corners of the market. That’s a good long-term sign.

Fly in the Ointment

However, there is a bearish fly in the bullish ointment. The second chart plots the S&P 500 against the percentage of S&P 500 and NYSE stocks above their 50-day SMA. 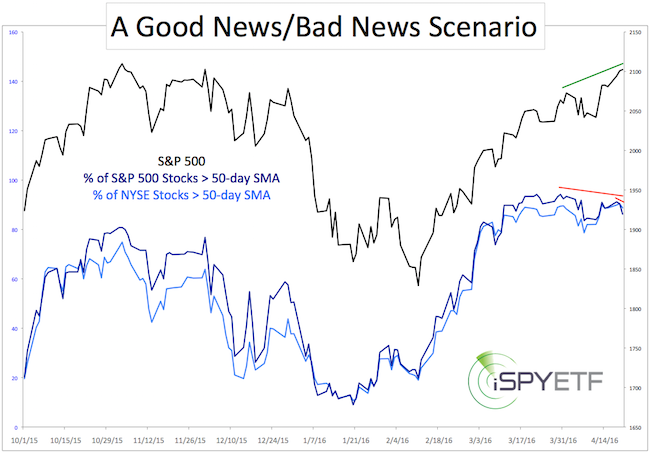 The percentage of NYSE stocks above their 50-day SMA has been stronger than the percentage of S&P 500 stocks, which confirms the strength of the broader, more diversified NYSE composite.

As of Wednesday’s close, the percentage of NYSE stocks failed to confirm the new S&P 500 (and NYSE Composite) recovery highs (short red line). The percentage of S&P 500 stocks above their 50-day SMA has been lagging since March 30 (longer red line).

All the strong breadth reading throughout this rally confirmed our February 11 buy signal.

Although we anticipated a temporary pullback, the April 3 Profit Radar Report stated that a break below 2,040 is needed as the first step towards confirming further weakness.

Staying above support, combined with the long-term bullish developments registered in recent weeks/months has buoyed the S&P 500 higher (the rally from the February low looks like a micro copy of the 2013 rally).

Unless the bearish divergences mentioned above are erased, the S&P 500 is nearing another inflection zone that may rebuff stocks for a little while.